Max Pechstein, one of the earlier German Expressionists and a member of Die Brucke, painted works which had a fauvist influence. This one, on the other hand, actually reminds me very much of Edward Munch. Pechstein, who was accused by Nolde of being Jewish, had to prove that he had no Jewish lineage to the Prussian Academy of Art, but he was still vilified as a degenerate artist. He was not a hero in any sense, making efforts to lie low politically. He also did not seem particularly concerned by antisemitism for Jews but only when it was directed at himself. 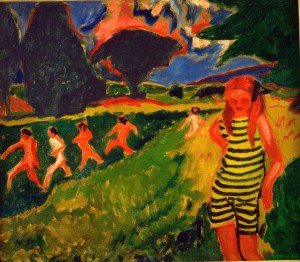 Hello, and welcome. I'm writing this blog under an alias. Why an alias? I started to write what may be described as an "American Gothic" novel (sort of Henry James/ Franz Kafka with violence) with some autobiographical details. ..when I started this blog I just decided to use the alias. This blog is about art and art history, but my interests also include literature, film analysis, psychology, forensic psychology, faerie tale analysis, cognitive therapy, cognitive linguistics, classical theater, World War II, and Russian and British history. My favorite writers include Kafka, the Brontes, and Philip K Dick. Thank you for reading this blog and I will happily reply to any comments.
View all posts by kinneret →
This entry was posted in Uncategorized. Bookmark the permalink.