Hundertwasser: Grass for Those Who Cry

Friedenscheich Hundertwasser is one of the most fascinating artists alive, both because of his artwork and life story.  (See more below) 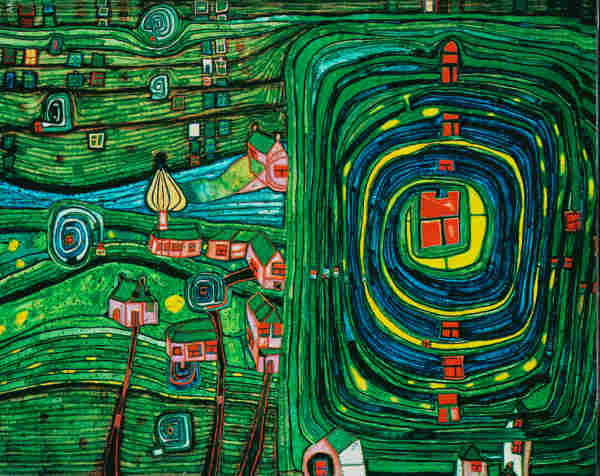 As a child, Hundertwasser and his Jewish mother stayed alive by posing as Catholics in Vienna. His father was a Catholic so they managed to be believed, but Hundertwasser was forced to join Hitler Youth. Even if his mother had not been religious, one can only imagine how this must have impacted him to know he was Jewish and to watch the Jews of Austria sent to extermination camps while he and his mother lived, and to mingle and associate on top of that with Hitler Youth and adults who would have vilified him and turned him into the authorities to be shot on the spot, if they had realized his true identity. Hundertwasser was also briefly married to an Austrian girl whom he shortly afterward divorced because of her emotional blackmail (she threatened suicide if he did not marry her) but also because she was influenced by her Nazi parents and viewed Hundertwasser in the strangest ways. As a result of the terror he had endured as a child, Hundertwasser took an anti-tolitarian view which even expresses itself in his love of spirals, equating them with nature and individualism, He had a strong dislike of straight lines, refusing to use them even in his architecture (he was an architect as well as a painter). His early fears of the square marching battalions associated with dictatorships may have led him to oppose any “geometrization” of people and their architecture.  He called straight lines “godless and immoral” and “something cowardly drawn with a rule, without thought or feeling. Hundertwasser moved to New Zealand where he lived and died, and was an environmental activist and ahead of his time in that regard as well.

Hello, and welcome. I'm writing this blog under an alias. Why an alias? I started to write what may be described as an "American Gothic" novel (sort of Henry James/ Franz Kafka with violence) with some autobiographical details. ..when I started this blog I just decided to use the alias. This blog is about art and art history, but my interests also include literature, film analysis, psychology, forensic psychology, faerie tale analysis, cognitive therapy, cognitive linguistics, classical theater, World War II, and Russian and British history. My favorite writers include Kafka, the Brontes, and Philip K Dick. Thank you for reading this blog and I will happily reply to any comments.
View all posts by kinneret →
This entry was posted in art, Hundertwasser, World War II and tagged art, Österreich, environmentalism, Hundertwasser, kunst, World War II. Bookmark the permalink.

2 Responses to Hundertwasser: Grass for Those Who Cry