Miniature portrait of Jane Small by Hans Holbein the Younger (1497-1593), strikingly realistic. Holbein was a court painter of Henry VIII. Most of his models were nobility, but she was not. One of her daughters, Katherine, was accused of adultery by her husband who put four children his wife had born on the Mayflower, the Pilgrim ship which sailed to America. Three of them died. 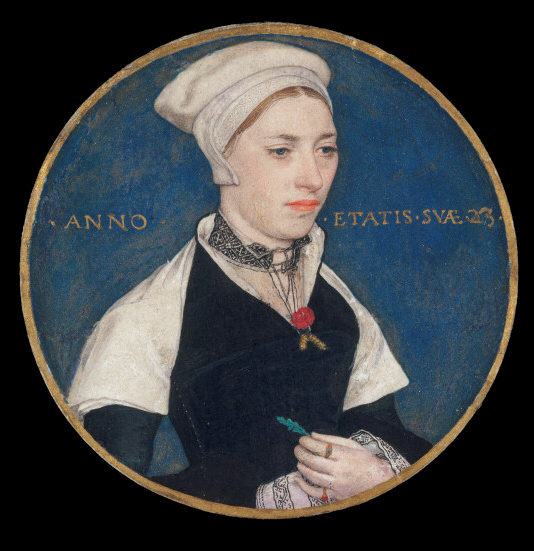 Hello, and welcome. I'm writing this blog under an alias. Why an alias? I started to write what may be described as an "American Gothic" novel (sort of Henry James/ Franz Kafka with violence) with some autobiographical details. ..when I started this blog I just decided to use the alias. This blog is about art and art history, but my interests also include literature, film analysis, psychology, forensic psychology, faerie tale analysis, cognitive therapy, cognitive linguistics, classical theater, World War II, and Russian and British history. My favorite writers include Kafka, the Brontes, and Philip K Dick. Thank you for reading this blog and I will happily reply to any comments.
View all posts by kinneret →
This entry was posted in art, Northern Renaissance and tagged art, england, Hans Holbein, Northern Renaissance. Bookmark the permalink.